Sign up here if you would like to receive author updates from Linda Lappin regarding upcoming events, publications, workshops, and other news. Your email will not be shared with anyone else. Thank you.

Carnival is here! Writing prompts for masquerade and masks 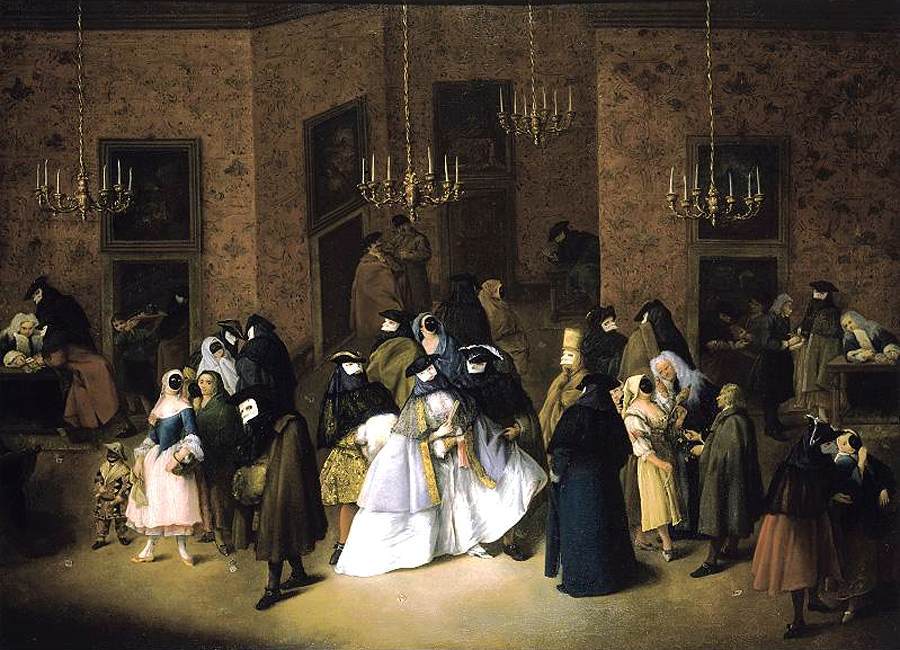 Here are some notes on this tradition and some writing exercises and prompts celebrating masquerade, disguise and masks.

Masquerade nowadays is often considered to be an entertainment for children, usually at Halloween, when we impersonate spirits and ghosts. In earlier times, however, ritual masquerade was primarily for adults and performed important social and spiritual roles especially in the period known in the west as Carnival. This tradition lives on today in Catholic countries in a few world-famous celebrations such as the carnivals of Rio de Janeiro and Venice, and the Mardi Gras of New Orleans.

The Christian tradition of Carnival situates it sometimes right after Christmas lasting till the Tuesday before Lent, Ash Wednesday. These weeks were a time of feasting and transgression, when the vital needs of the body and the flesh ( "la carne") were celebrated and gratified without restraint.
In some areas, Carnival has blended with local traditions – as in Sardinia where indigenous folklore combined with vestiges of the earlier Phoenician culture to create a unique Carnival parade known as the Mamuthones. In this festival, zombie –like creatures dressed in sheepskins and wooden masks march through the streets, while brightly- clad figures capture onlookers with lassoes. To be lassoed during the parade is considered a lucky event, but this custom is thought to derive from a Phoenician ceremony in which sacrificial victims were chosen.

In Tuscia, the feast day of Saint Anthony kicks off the Carnival period. On this day animals, both pets and livestock, are blessed in church and huge bonfires are lit in public squares in memory of ancient propitiatory and purification rites hearkening back to the ancient Roman festival of Saturnalia. During this celebration, people of all classes could mingle and slaves and masters changed places for a day. Businesses, public offices, and schools shut down as the routines of daily life were set aside. Gambling, drunkenness, licentious behavior were allowed. All this served to help drive out the winter spirits of darkness, revitalize the natural cycles, and prepare the way for the sun to return.

The Christian Carnival tradition borrowed three practices from the ancient Roman Saturnalia. Firstly, a focus on food –with pancakes or fritters being a typical dish -- along with the overconsumption of meat, sweets, and alcohol. Secondly, an emphasis on sex and fertility. Social rules regarding sexual behavior were temporarily loosened. Lewd pranks and bawdy humor set the tone for popular entertainment in street circuses and pageants where fertility symbols were prominently displayed. Thirdly, “misrule” – the suspending of social hierarchy. Breeches of propriety, etiquette, and piety, insults, and challenges to authority -- all were permitted. Political satire was, for this brief time, not subject to censorship and control. The world was turned upside down.

The social freedoms of Carnival were made possible by yet one more custom inherited from the Romans: the wearing of a mask at this time. However, this had some negative consequences: while wearing a mask, it was easier to conceal signs of disease from others or to perpetrate crimes anonymously. Narratives set in Carnival time often involve criminal acts committed in disguise, or sometimes death by transmittable diseases, such as the plague, which happens in Edgar Allan Poe’s “The Mask of Red Death.”

Disguise and masks remain a popular form of adult entertainment. We may play out fantasies by donning a wig or a domino, the hooded cape of the Venetian carnival, used by both men and women, hiding the whole body in voluminous folds. Stanley Kubrick’s erotic thriller, Eyes Wide Shut, adapted from a novel by Arnold Schnitzler, employs dominos and other iconic Venetian masks to portray darker instincts hidden beneath facades of propriety. Lawrence Durrell, describing the carnival in his masterpiece, The Alexandria Quartet, writes “ What stamps the carnival with its spirit of pure mischief is the velvet domino – conferring upon its wearer the disguise that each man in his secret heart desires.”

Masks can be receptacles for the projection of what Jung called the shadow -- the darker sides of ourselves – fear, loathing, desire, impulse, transgression, otherness, which we cannot acknowledge openly and which appear in our nightmares. Masks may also express emotions in a pure state – like the Greek comic and tragic masks, or idealized icons of beauty or ugliness. They may embody the spirit of a place or people. They may manifest archetypal figures or character tropes. As ritual objects they may serve to connect us to other levels of reality: the underworld, the world of animals, magical beings. As vehicles of impersonation, they allow us to take on the identities of celebrities or imaginary characters we admire or envy. Masks are power-charged artifacts: Hannibal Lecter’s iron muzzle invokes in us an instinctive fear. The white Guy Fawkes mask popularized by the movie V and adopted by protest movements everywhere - speaks of challenge to tyranny and the vindication of the rights of the oppressed.

It can be frightening to see a masked person when we don’t expect it. The recent panic over clown sightings in the US and Europe is an example. We may imagine the worst if we find a masked person standing on our doorstep – but we may have got his intentions wrong. Write a scene in which a masked person , intending no harm, turns up in an inappropriate place.

In carnivalesque literature, the rules of daily life don’t apply – as in Midsummer’s Night’s Dream. Write a scene involving two couples who are matched with the wrong lover.

Write a scene in which a natural or supernatural force shapeshifts into a human being.

Write a story with a disguised traveler as the narrator.

CONVERSATIONS WITH A MASK

This exercise is best done with any form of mask made to be worn on the face, and not a merely decorative object. It can also be done with a mask you have made yourself.
Ask yourself these questions and jot down your responses
 What is it made of? Where and when was it made – in what context was it created?
 What powers or feelings does it evoke?
Take some time when you are alone. Put the mask before you on the table. In a passage of free association ( or speaking out loud), address the mask directly asking it a question ( for example : Tell me your name?) and ask it to reply.
Write down its answer. Ten minutes
Put the mask on and look at the world through the slits of its eyes, then at yourself in the mirror. What do you see? Be prepared for surprises
Write down your response. Take as long as you wish for this exercise

More exercises like this are found in The Soul of Place – A Creative Writing Workbook.