Lappin, Linda. Signatures in Stone: A Bomarzo Mystery. Caravel: Pleasure Boat Studio. 2013. 285p. ISBN 9781929355907. pap. $18. MYS
Ensconced by her forceful publisher Nigel in a rundown villa in the Italian town of Bomarzo, writer Daphne DuBlanc (Marilyn Mosley is her nom de plume) is stuck for an idea for her next Edna Rutherford mystery. It doesn’t help that she has smoked the last of the hashish she secretly brought from Paris. “Without inspiration I could not write. What was needed was a new batch of signatures, those curious messages our waking life sends us from our unconscious, which I have come to see as promptings from the muse, and even as a spiritual guide for my own existence.” But as she begins to explore the villa, which is filled with priceless artistic treasures, and the neighboring 16th-century sculpture garden known as the Monster Park, Daphne finds signs and clues—a broken head of a china doll, a pearl button, an ancient map—to deeper mysteries about this strange place and its inhabitants: the gatekeeper Manu and his daughter Amelia, Professor Firestone, an American art history scholar writing about the Monster Garden, Clive, a novice painter, and even the down-at-heel aristocratic Nigel.
Verdict Deftly mixing fascinating art history and murder with an exotic atmospheric setting (the Bomarzo garden actually exists), dramatic historical period (1928 fascist Italy), and fully fleshed characters, Lappin (The Etruscan) has written a hallucinatory gothic mystery in which no one is as they appear. Daphne is a most memorable, if a bit unreliable (thanks to her opium habit), narrator. Readers looking for an intelligent summer mystery will find much to savor here.—Wilda Williams, Library Journal

MBR Midwest Book Review
"In a search for our destiny, we may sacrifice much and still never truly find it. "Signatures in Stone" is a novel from Linda Lappin, invoking many a gothic theme as she tells of four individuals who go through life and trying to piece together where they are going through their lives, and how they must go into the darkest nature to truly understand it all. "Signatures in Stone" is a must for those seeking a taste of the international and psychological, recommended."

"An unusual mystery set in Italy in the 1920s, and featuring a middleaged writer of mysteries who has a drug problem and needs to
find a way to (1) kick the habit, and (2) write her next novel.
She gets involved with several characters who may or may not
be very upright. What’s really going on in the mysterious estate
with its strange sculpture-filled garden? Suddenly, a murder.
Lappin’s theory about the sculptures, based on a real life garden,
is exciting. Our June History/Mystery Paperback Pick."

Signatures in Stone "Readers looking for an intelligent summer mystery will find much to savor here."— Wilda Williams, Library Journal

REVIEW OF SIGNATURES IN STONE FROM RAIN TAXI
The evocation of place is a primary pleasure
for many readers of literary mysteries, the
atmosphere and details of a well-described
setting central to the complexity of unknowns and
the explorations of their nuances. In fact, good
mysteries tend to explore place more than any
other literary form, often because the history of a setting, its buried
past, must be probed in depth to attain comprehension of
what has happened in the present.
Linda Lappin has created such a setting in Signatures in Stone,
using the actual landscape of Bergamo and its Renaissance Park of
the Monsters. But by locating Bergamo in an ancient region called
Tuscia, Lappin conjures an environment with its own reality. Although
the novel is set in the 1920s, the principals, dislocated
from 20th-century Paris and London, find themselves thrust into
a primeval world.
The novel’s opening page literally plunges the central characters
into that world, first introducing them under the sky’s bright
light in a gleaming Packard driving though an enchanting Italian
landscape of meadows, flowers, and olive trees. But suddenly:
About a hundred miles north of Rome, we turned inland to
cross a marshland, then a succession of arid hills where broken
bits of ancient Roman aqueducts stood stark against the
twilight. Farther on, deep ravines gashed the
terrain like unhealed fissures from which rose
twisted masses of gray stone where ancient
houses, domes, and grottoes and were chiseled
along the edges. Only a great turbulence from
deep within the earth could have gouged out
such chasms . . .
The story itself echoes that turbulence.
Effective as it is, place alone will not satisfy the
needs of a compelling mystery. The characters
must also fulfill the challenges offered by the setting.
Lappin has populated a dilapidated villa and
its adjacent park of grotesque sculptures with a
vivid group of victims and suspects who turn out
to be mysteries in themselves, not who or what
they seemed to be when first introduced.
The one stable character in that sense is the narrator,
a “woman-of-a-certain-age” (her term for herself) mystery
novelist named Daphne DuBlanc. On the edge of poverty, Daphne’s
only support is the income from her writing. She does not
have deep and dramatic secrets, but psychologically she is on the
edge, blocked as an author, desperate for drugs and sex, and subject
to seeming hallucinations. As such, Daphne is not a reliable
narrator; this trait perplexes the character as much as it does the
reader. Daphne often finds herself threatened and disoriented.
The villa she inhabits, lit only by candlelight, is a place of many
shadows, hidden passageways, strange noises, crumbling walls,
and rare art of great worth. People and forces can emerge from the
darkness or literally drop out of the ceiling. Beyond the sculpted
monsters it houses, the park itself is even more ominous with
caves, pits, and booby traps.
While the primary pleasures of Signatures in Stone are its places
and its people, the story itself satisfies because its twists are engrained
in the chasms of its setting and its characters. -- Walter Cummins Rain Taxi

Bomarzo, March 1928
We arrived in the evening after an exhausting drive along the sea through a land of silvery olive trees where innumerable dirty sheep dotted the meadows, and a rosy haze of blooms shimmered above low-lying peach groves. The Italian countryside looked sleepy and wet. Tenuous clouds, pinkish and plum–colored, streaked and feathered a lavender sky. And the light! Impossible to describe the tints of amber, ochre, bloodied tangerine. I was enchanted, but our artist friend Clive was too woozy to rhapsodize. He sat green-faced in the front passenger seat, clutching his Stetson on trembling knees, groaning at every curve. Determined to reach Bomarzo before nightfall, Nigel steered our gleaming Packard, fearless and expert, along dirt tracks, scattering chickens from the roadside, while I sat in the back, wrapped in a shawl, looking out at solitary oaks and ruined towers. Though I may have reached that phase of life dubiously called “a certain age” when women often cease to enjoy traveling, nothing engages my fantasy more than a long road trip with rapid changes of scenery, as in this undiscovered country called Tuscia.

So begins the intriguing new work by this remarkable novelist, a work in which she captures both Italian art and Italian history through a page-turning thriller involving deep secrets, robbery, and murder.


We are constantly immersed in a network of signs and symbols whose meaning eludes us, but which, if only we could read them, would reveal every detail of our past and even of our future. Little signs presaging an event, and persisting in their own way till long after it is over. A sort of anticipating echo. They are everywhere--- a casual word in a conversation overhead, an unusual design of seaweed and twigs washed up on the beach, a picture on a postcard slipped in between the pages of a borrowed book, a glove abandoned on a train. But to make them speak intelligibly...that is another question. -- Linda Lappin Signatures in Stone 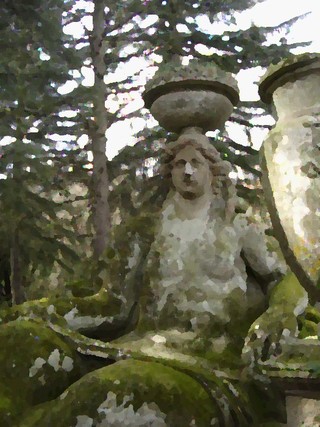