A Visit to Santa Lucia, a Hermitage in the Tuscan Woods 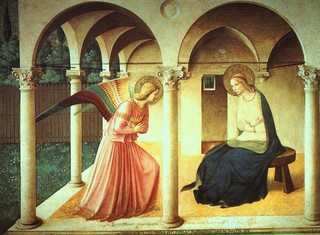 One of the most famous frescoes by Fra Angelico in the convent of San Marco is the large Annunciation along the corridor, just at the top of the stairway, which greeted the monks, day in and day out, as they ascended from the ground floor to their cells and to the library. The fresco shows the Virgin seated on a humble wooden stool, resembling a milking stool, under a lovely loggia whose airy vaulting and handsome columns resemble those of the convent’s own library. The Virgin is listening to an angel who has alighted on her porch, the edge of which borders a garden full of leafy, low-growing plants, very much like the salad greens and medicinal herbs which might have been cultivated in the cloister for the convent’s use. The garden is enclosed by a wooden stake fence separating it from a wood with tall, lush trees and stark, spindly cypresses so common in the Tuscan countryside. The scene resonates with quiet joy.
Before painting this fresco, Fra Angelico had painted other Annunciation scenes, such as the one now in the Diocesan Museum of Cortona, which are quite different from this one in mood and spirit. In the Cortona Annunciation, painted a decade earlier and intended as an altarpiece, the Virgin, dressed in unadorned garments of sumptuous red and blue, sits on a chair upholstered in gold brocade. A golden dove floats above her head, symbolizing the divine energies about to enter her body to work the miracle of the immaculate conception. Behind her, a red curtain has been pulled across a doorway, limiting our view of the interior of her home. The angel, clad in a pink gown with ornate, gold embroidery, presses towards her in a dynamic, even perhaps aggressive pose, as if about to spring towards her, pointing at her with his right index finger, while his left hand gestures upwards towards heaven. His message appears in little gold words tumbling from his mouth through the air. Mary, with a book in her lap, seems quite taken aback, even terrified by the unexpected visitor. Although there is no fanfare of trumpets or cherubs, as we sometimes find in gothic representations of the Annunciation, the angel’s stance and gestures, the gold trimming and opulent colors, all hold a strong emphasis marking this extraordinary moment when the divine and human merged. The use of gold and rich fabrics denotes the spiritual elevation of the figures. As future queen of heaven, it is quite appropriate that Mary should be seated upon a brocade cushions, as emissary of God, it is equally appropriate that the angel should be garbed in luxury.
Nothing could be further from the austere beauty of the San Marco Annunciation, although the settings of the loggias, arches, trees and garden with salad greens are almost identical in the two paintings. In the San Marco Annunciation, the colors are more subdued, Mary’s drab, black and white garment is much plainer than the dress she wears in the Cortona scene, recalling the sackcloth robes worn by the Dominican friars of San Marco. Gold has been sparingly employed only for the halos of the two figures, the modest trimming on the angel’s gown, and in a few bits of glitter sprinkled throughout his rainbow wings which twinkle randomly, depending on the light in the corridor. The wings seem to be inspired by those of a butterfly or bird and are the most colorful detail in the painting. The use of perspective invites the eye to follow the vanishing point through a door in the background and to a window beyond that, which, very similar in shape to the windows in the convent cells, must face out over the trees. But what is most extraordinary is the attitude of the two figures, bowing towards each other gently, in mutual recognition, in a moment of deeply intimate exchange. The angel seems to be confiding something to the Virgin, a secret perhaps. There are no outward displays of glory, no outer emphasis, only the record of an intensely personal experience. It is all interior.
The prominent positioning of this fresco at the top of the stairs, where it would be seen every day by all was chosen to capture the attention of the monks and strike home to their hearts, reminding them that they too had received the good news of the annunciation which had led them to choose a spiritual vocation. They were not only climbing a staircase made of marble, but also one of the spirit, which required them to make ceaseless efforts in order to progress. “There is no harder fight than the struggle to overcome oneself,” wrote Thomas a Kempis.
Read More
Be the first to comment
Loading…}