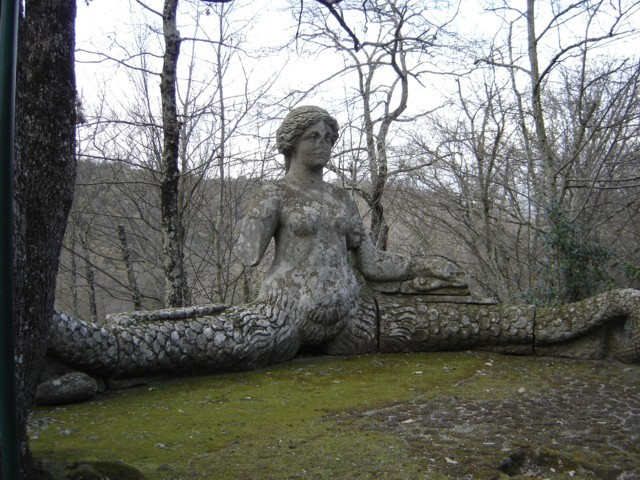 Several readers of my mystery novel, Signatures in Stone, winner of the 2014 Daphne Du Maurier Award for mystery writing, have asked about the sources for some of the concepts concerning the Sacred Grove of Bomarzo that I incorporated into the story. Below is a brief glimpse at some of the books and ideas that influenced me.

Since its creation in the mid 16th century, the “Sacred Wood” or “Monster Park” of Bomarzo near Viterbo has continued to astonish visitors and puzzle scholars who continue to debate such key issues as the precise dating, artistic attribution, and meaning of the bizarre sculptural composites it contains – a hell mouth concealing a secret room which resembles the interior of an Etruscan tomb, sculptures of giants, dragons, elephants, sirens, and a small leaning palace designed to throw you off your balance. No certain evidence remains to document the names of the artists and workmen who designed and sculpted these creatures or, more importantly, to testify to their creator’s intention, and a number of interesting questions remain open to interpretation. Was the garden the brainchild solely of its patron, prince Vicino Orsini, a fanatical hemeticist and alchemist, or was the whole designed by a single artistic genius? Were the individual sculptures executed by rough local workmen, by Turkish prisoners , or by a group of artisans connected to an illustrious school in Rome? Were these strange beasts plucked from Vicino’s imagination, or perhaps, from some of his worst nightmares? Or are they meant to be symbolic? Various scholars have interpreted them as: representations of the seven cardinal sins, illustrations of Italian epic poetry, witty allegories of important political events of the period, pictograms of the milestones in Vicino’s personal life and career, alchemical symbols linked by an esoteric itinerary of initiation.
Another mystery concerns the relationship between the sculptures. How are they to be read? Is there a prescribed order to follow in viewing them? Do they conceal Christian meanings or are they rebelliously anti-Christian and pro-pagan? These are only some of the unresolved issues, but several recent and not so recent publications offer curious angles of interpretation which are worth exploring to anyone who has fallen under the spell of this place of dark enchantment.

Enrico Guidoni’s Il Sacro Bosco nella Cultura Europea, (Vetralla, Davide Ghaleb Editore, 2006: www.Ghaleb.com ) is bound to shatter some conservative views of the Sacred Wood. Guidoni has painstakingly pieced together textual and iconographic evidence which would suggest that the Sacred Wood was by no means an isolated experiment sprung from the maniacal imagination of its princely patron, but a complex sculptural composite conceived and designed by Michelangelo and technically executed by a group of artisans closely linked to the era’s greatest sculptor. The text includes an alphabetical “bestiary” with entries dedicated to each of the sculptures and major decorative elements, explaining their basic symbolism. The book is handsomely illustrated with photographs from diverse periods dating back fifty years,offering a rapid glance at the deterioration to which the garden and its environment have been subject. Given the importance of this study, one hopes that the publisher will bring forth an English edition.

Maurizio Calvesi instead, in Gli Incantesimi di Bomarzo: Il Sacro Bosco tra Arte e Letteratura, (Bonpiani, 2000) reads the sculptures in relationship to the poetry of the era. His research focuses on literary allusions incarnated in the weird figures and explores the significance of the many cryptic inscriptions which appear throughout the park and in nearby palazzo Orsini.

Whereas the focus of Peter Lamborn Wilson’s essay, "Oneiriconographia: Entering Poliphilo's Utopian Dreamscape," in issue 5 of the review Alexandria , is Francesco Colonna’s emblematic Hypnerotomachia Poliphili (The Strife of Love in a Dream), he relates his reading of this cryptic text to his explorations of Bomarzo and other sites outlying Viterbo, which had been suggested to him by a Roman alchemist as stations in an initiatory journey. For Lamborn Wilson, the absence of Christian symbols in the garden ( with the exception of the octagonal temple) would confirm Vicino’s rebellious attitude towards the ecclesiastical hierarchy. His garden is written in an alchemical code which makes use of the language of emblems, bypassing linguistic discourse to communicate meaning to the unconscious mind. Francesco Colonna’s emblems invite the reader to interpret their meaning on multiple levels simultaneously, and to read himself/herself into the narrative, to become a performer of the text, reenacting Poliphilio’s dream- quest. This intriguing idea could be applied to the Sacred Wood itself, in which each visitor plays the role of quester, re-enacting the search for the philosopher’s stone amid these giant emblems hewn in stone.

One wonders who Lamborn Wilson’s Roman alchemist might have been, but one possibility is Elemire Zolla of the University of Rome, author of many works on archetypes, hermeticism, and alchemy, including “Bomarzo: Il Santuario Neoplatonico” an essay offering a guide to the park as an arena of initiation. Art history scholar Antonio Rocca picks up this thread in his Bomarzo Ermetica: Il Sogno di Vicino Orsini, with an intriguing analysis of the park’s symbolism read within the context of Giulio Camillo’s theatre of memory.